Al Oft the Lightyear Blimp is a blimp who flies over the Piston Cup races.

The first die-cast release of Al Oft was in the Supercharged series. It was part of a Wal-Mart exclusive singles set. The first release was a very small version.

The next release was in the World of Cars series. He was #63 in the series and was released in a 3 pack later in the year. 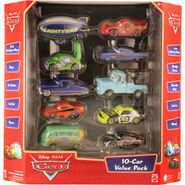 Race Officials 3-Pack
Add a photo to this gallery
Retrieved from "https://pixarcarsdiecastvehicles.fandom.com/wiki/Al_Oft_the_Lightyear_Blimp?oldid=4076"
Community content is available under CC-BY-SA unless otherwise noted.